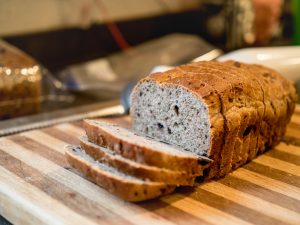 “Good bread is the most fundamentally satisfying of all foods; and good bread with fresh butter, the greatest of feasts.”
― James Beard

The bread shown in the above picture is not actually Cranberry Wildrice Loaf, my bad.  Actually, it is my good!  Earlier this fall, I started playing with Wildrice Cranberry bread and figured it was such a GREAT recipe, I’d like to see what it does with blueberries instead of the cranberries.  I remembered to grab the camera and I’d been promising to blog about that recipe so here it is………this time with blueberries in place of the cranberries.  They both work equally well, the cranberries have a little bit more of a tang than the blueberries but both serve a great purpose in our cooking!

It all begins with the gathering of the ingredients. 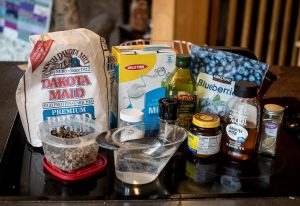 Most recipes call for bread flour but I’m not holding anyone to that.  I’ve used all purpose and it has worked out just fine.  I’ll be posting the actual recipe down below but another thing besides worrying about flour type I do……the recipe calls for 1 1/2 Cup of water (I make sure mine is about 110 F) and 1/3 Cup of milk powder…..I think you could just dump them individually into your bread machine basin but I prefer to mix them together.  Not sure why, I just do!  I also buy the canned wild rice but you could certainly make your own from dried.  (probably a little more economical).

Once you have the supplies gathered………and again I screwed up.  I forgot the pine nuts in the gathering. 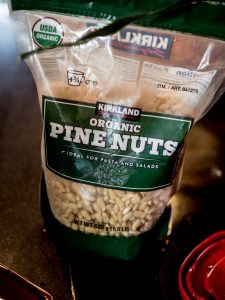 Pine nuts. A very interesting ingredient and something I had never heard of until recently.

Ok now that all of the ingredients are assembled we can start placing them into the basin of the bread machine.  I place everything in the order listed in the recipe except I’ve switched the honey and the olive oil around.  I always find it tricky to get all that honey goodness off the measuring spoon but if that same said measuring spoon previously held olive oil….the honey just slides right out of the spoon and into the basin!!!!  FUN FACT!!!  The only ingredient we wait on is the cranberries or the blueberries.  So once everyone is in there, I set my bread machine to the dough setting and let it do it’s thing.

The original recipe calls for putting it on the 2LB loaf setting and though I’ve done the entire kneading and baking in the bread machine, I prefer to split it up into two smaller loafs so I use the dough setting.  It starts its spinning and at some point my bread machine beebs at me for my additional ingredients.  That is when the blueberries or cranberries go in. 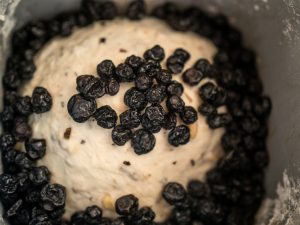 Adding the blueberries or Cranberries to the dough

When the dough cycle is finished, I dived it into two greased (don’t use spray oil use Crisco!!!) loaf pans.  I set them in a warm oven to rise until fluffy and than in the oven at 375 for approximately 30 minutes.  If your bread starts to turn brown too fast just place loosely aluminum foil over them.  When finished I set on there side on a rack to cool before removing from the loaf pans! 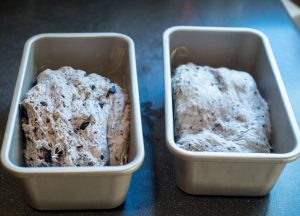 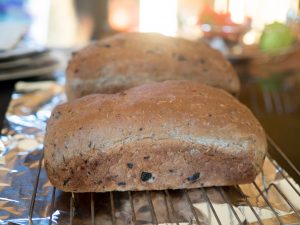 This bread is so versatile!  It makes a great French toast!!!  I love it for sandwiches in the panini grill (some bacon ,tomato ,cheese and pickled peppers yummy!!!).  It makes a great toasting bread!  I don’t think you can go wrong .  Oh  ya I almost forgot that Whipped Honey Cinnamon Butter …….that’s what I’m talking about!

I hope you give it a try.  It is so easy and so good and everyone well beg you for more!!!