Probably why they are an American thing not a French.  I read that French Dips originated in Los Angeles  .  There are two restaurants  that claim they were the birth place of the first French Dip.  Theory is that they are named French Dip after the style of bread they were originally served on.  Now that would not always be the case.  French Dips can and have been served on a variety of breads, buns and even tortillas and fry bread!  So lets get down to business and I will walk you through how I made my French Dip.  As I’ve said time and time again, it is hard to put down a firm recipe, I’m that person that takes and idea and twists it to fit what I want.  I’ve been pretty successful over time, but don’t try my French (I’m not sure if that is French either) Onion soup.

I begin my sandwich with making sure I have wonderful flavored beef to go in it.  I’ve used most any beef roast but this is my way.  I take a partially frozen roast and put it through our meat slicer so I have very thin slices of beef. 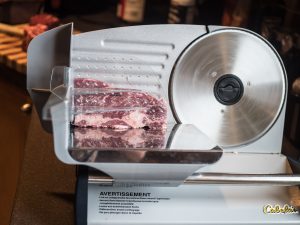 I place the thinly (and I mean thin!!!!!) sliced beef into my crockpot.  The crock pot was originally developed by the Naxon Utilities Company of Chicago as a way to make a bean meal.  It was inspired by Naxon’s Lithuanian Grandmother, since than it has become a huge staple in American cooking.  Making life a little easier on busy families!  Added to the meat is sliced onion. 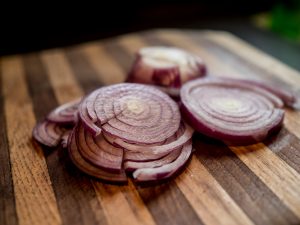 Now we need to marinate our beef and onions before we turn on the crock pot.  I open a beer, I’m not picky on the beer, usually it is whatever is left in the fridge and one I think the beer drinkers in my family are not coveting. 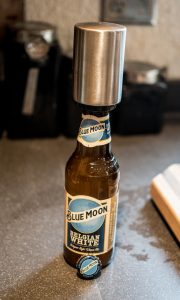 I think beer has a lot of things going for it. “The health benefits of beer include anticancer properties, a reduced risk of cardiovascular diseases, increased bone density, the prevention of dementia and coronary disease, aid to the digestive system, and anti-aging properties, as well as treating diabetes, gallstones, kidney stones, osteoporosis, and hypertension.”

You will notice a silver thingy on my beer.  I don’t know what it is called, it is a gadget I discovered this summer.  It is slicker than ice under a pair of crocks in removing the beer cap!

I pour the beer into a measuring glass and to it I add one package of dry onion soup mix, heaping spoonful of minced garlic, 2 Tbsp of Worcestershire and 2 Tbsp of Au Jus Mix wisk and pour over the onions and beef. 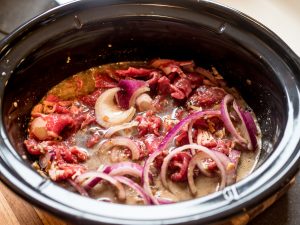 You can do anything with beer that you can do with wine. Beer is great for basting or marinating . 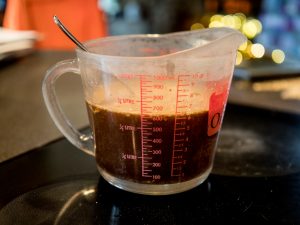 Au jus is a French culinary term meaning “with juice”.

Because I was forward thinking, a very rare statement in my life, I actually was able to let this stuff sit in the refrigerator over night!!!  (That rarely happens but if you can marinate it for a while it is that much  more flavorful!)  The next morning (later than early, it doesn’t take hours for beef to cook unless you like yours well done and we prefer our cow to still mooo)  Fun fact…Cows moo when they are scared or sense that something is wrong.  I suppose they probably Moo a lot when I’m around since they know how much I love beef for dinner!

OK so now that the meat is done shall we assemble the sandwich.  I chose to use the slider recipe without the slider buns.  I  used Ciabatta buns on this particular day but I’ve used sweet Hawaiian slider buns as well as French bread etc.  First step is to butter your 13 x 9 inch pan. I than place  6 bun bottoms in the pan and top with cheese. You can use any kind of cheese, though I think white cheeses are the more popular.  I used Havarti and Pepper Jack  cheese this particular day.  First one slice of cheese than top with meat and onions and add another slice of cheese before topping with the top bun! 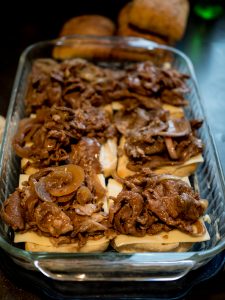 beef and cheese on a bun 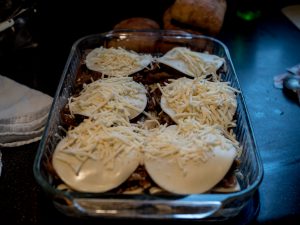 “Cheese is a food made from the milk of cows, goats and other animals and, like the milk, the finished product is usually white. Certain grazing conditions will result in tints to an animal’s milk, as will ingredients added to change the flavor of the cheese, though most non-white cheese is simply dyed. There are, therefore, a wide variety of white cheeses on the market today with different flavors, textures and uses” ehow

So what makes this particular French dip so good is adding extra yum to the top of the bun!!!  You need to melt one half cup of BUTTER (not the substitutes SAY NO TO THE SUBS  …they are sub par!!!  means they don’t make it rock!)  add to this 1 tbsp. of au jus seasoning, 1 tbsp. of Worcestershire sauce, 1 tsp of onion salt, 1 tsp of garlic powder, 1 tsp of seasoning salt (I prefer Lawrys) and 2 tsp of sesame seeds.  Mix well and slather that goodness ALL OVER YOUR BUNS!!!! 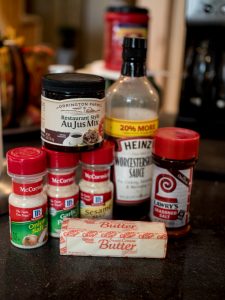 “Ordinary folk prefer familiar tastes – they’d sooner eat the same things all the time – but a gourmet would sample a fried park bench just to know how it tastes.”
― Walter Moers

At this point we are ready for the oven.  I baked my French Dips at 350 for about 30 minutes.  Make sure you have saved the meat marinade to dip your Dip into.  You may want to strain some of the grease if it is excessive. 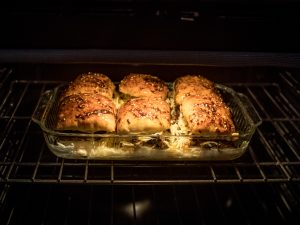 There is never a season to have a French Dip sandwich, every season is French Dip season!!!  Heat and Eat or next day cold.  YUM YUM!!! 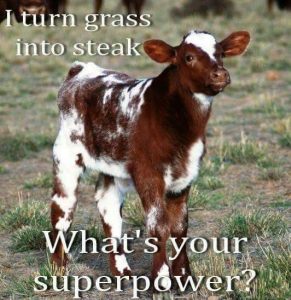