“A tomato may be a fruit, but it is a singular fruit. A savory fruit. A fruit that has ambitions far beyond the ambitions of other fruits.
E. Lockhart ”

I’m not someone who lives and breathes soup.  I think it  definitely has its place in the culinary world but soup is rarely my top choice for a meal (unless we are talking chili of course).  Fall days in Northern MN call for comfort food and on the particular day I made this soup, comfort was in high demand!

I started out with the ultimate food.  Bacon (because it really is a pork fat thing!).  I took about six slices of bacon and  cut and fried them all  in my All Clad stock pot. 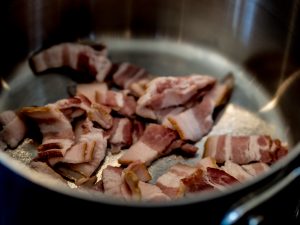 .While the bacon was cooking, I chopped up a few pretty red, orange and yellow peppers.  I’m not sure the exact difference between them and green peppers but I like their flavor and they add pretty color to almost all recipes. Than I did something I never thought I’d do.  I minced up a carrot.  There was a time in my life that I loved carrots.  That day is about 40 years past.  And of course I needed to chop an onion as well.  After my bacon was nice and brown, I added the peppers, carrot and onions to the pot  and also added a very heaping amount of minced fresh garlic to the pot.  I let this all saute’ about 5 minutes or until tender. 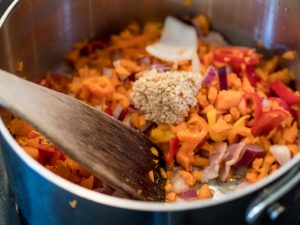 Not a true trinity because that would mean 3 and this is four…five if you count the bacon.

At this point we turn the heat down and add a couple cups of broth.  I prefer to buy the canned or packaged rather than get out the bouillon cube and soak it in water.  Call me a”bon bon lady”, but  at this stage of my life I believe I’ve earned some packaged conveniences.  I used chicken because it was what I had on hand but you could use any  kind of broth you prefer.   I also wandered down to my basement utility room and grabbed a can of Kirkland diced tomatoes and a can of the home grown (well not my home but Linda down the roads home) tomatoes I had canned earlier this summer.  I threw all of those in the pot with the rest of the ingredients and brought to a boil. 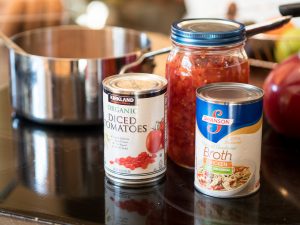 Manufactured canned and fresh canned tomatoes as well as broth

OOOOOPPPPPPSSSSSSSS~!!!  I did it again.  I got a head of myself.  Step back!!!  I forgot the 2 tbsp. of tomato paste and a tbsp. of flour.  So prior to tossing in the tomatoes and the broth get yourself a nice couple or more TBSP of tomato paste, the flour  and add it to the veggies and bacon.  Let it work its way in before you add the tomatoes and broth. 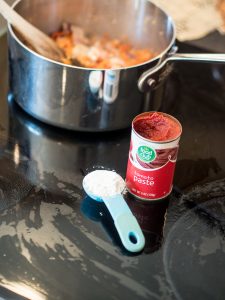 Paste and flour, makes me think of some kind of first aid concoction.

At this point the hard work is over.  I just set the soup to simmer  (mine usually simmers several hours because I never know when my husband will be home) with some added herbs.  I used 2 bay leaves and I have to make sure I count how many I use and make sure at the end of the simmering they are all accounted for.  My husband is notorious for getting the ” foreign objects” in our meals.  (Now I don’t think a bay leaf would be seriously considered a foreign object but Mic would disagree).  I also added basil which I did not have to worry about removing. 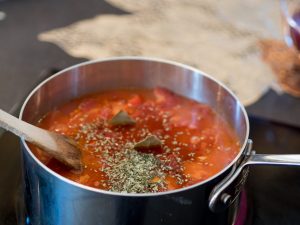 I served our tomato soup with some garlic bread.  I made my own garlic bread butter by pulsing the ingredients in my food processor. (I realized the other day, that thing is as old as my marriage!)  I used 1/2 cup of butter, a large heaping of fresh minced garlic, parmesan cheese, red pepper flakes and a few chopped up sun dried tomatoes.  (I’m not sure why I chopped them, the food processor does that).  Topped that lovely stuff on some nice bread and cooked until bubbly and toasted.  I can’t find an image of the entire dinner all put together.  Maybe it is on my cell phone =0). 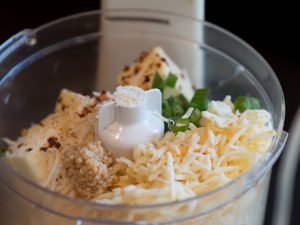 I found the cell phone image.  Not great but…….. 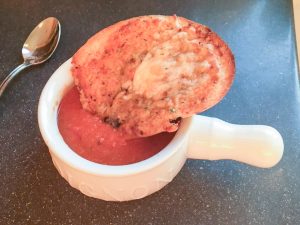 I hope if you try this soup you will let me know your thoughts on how it turned out!!!   And remember…..You are what you eat….so don’t be fast, cheap, Easy or Fake!!!!