Home » Families » “Boys, I may not know much, but I know chicken poop from chicken salad.” – Lyndon B. Johnson

Tonight we went with Buffalo Chicken On Sourdough.   Again, my husband is not a huge fan of chicken or buffalo sauce,  (Yiphee when he returns we will be blogging about Meat Loaf………)so tonight is my last chance for a few days to get something that’s more of a treat for me.

I’ve decided I’m going to add some avocado and smoked cheese to my sandwich.  I decided to do some research on keeping my avocado from turning brown so I could slice it up ahead of time.  This is what I found out.https://www.huffingtonpost.com/2012/01/10/keeping-avocados-from-turning-brown_n_1196633.html  I’m going to try the pit and add citrus to it too.

Also on the subject of Avocados, I often find it difficult in our smaller community to find ripe ones when I want them.  I bought a bag of them several weeks ago at Costco and had decided I wanted to make gauc later that week.  Problem, none were ripe yet.  I did what we always do and googled how to ripen avocados.  I found the advice to put it in a paper bag for a couple days and if you add a banana that makes it go faster.  Two days later, still not rip so I went with the next suggestion,  I wrapped in in aluminum foil and put it in the oven at 200 degrees for about an hour.  Well, it did soften but lost all the normal good flavor.  I don’t recommend trying to ripen an avocado any way but the natural way, even if that means having to change your menu. 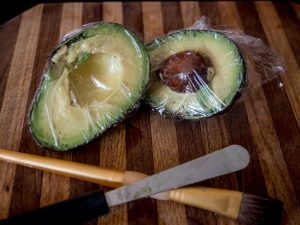 I did the pit and brushed both sides with lime juice and wrapped in plastic. 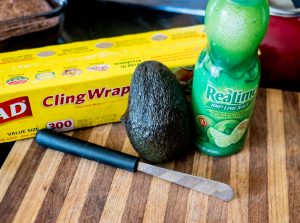 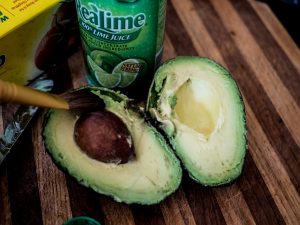 after a couple hours, I took them out and didn’t notice too much browning.  I used my avocado knife to remove one side and slice it for the sandwich. 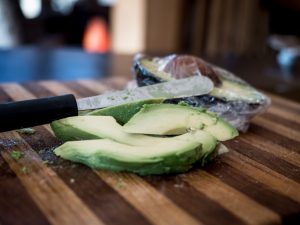 Time to gather the rest of the main ingredients. If you don’t know about Costco’s rotisserie chicken you are missing out. The cool thing about it is, they package up the leftover chickens and sell it already pulled off the bone. I am always keeping some of this in my freezer! 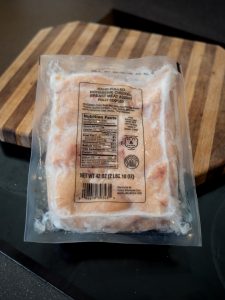 I used about 1/2 cup of the chicken and mixed it with a tablespoon of #franksbuffalosauce .  Franks has several sauces that I personally love.  I did not use too much because I will be adding another spicy element to this dish. 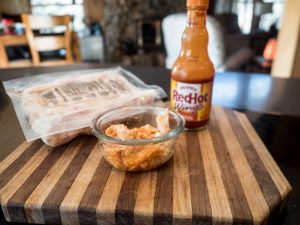 .  It is obvious, along with spice, I love CHEESE!!!!  I picked a smokey cheddar as I figured that would be a nice compliment to the chicken.  While at one of our local grocery stores, I stumbled upon a new item (the other spicy element). 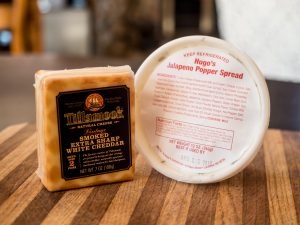 Jalapeno……..it ain’t on a stick

This jalapeno pepper spread was just the ticket to compliment the cheese and give a bit of creaminess to my melted sandwich! 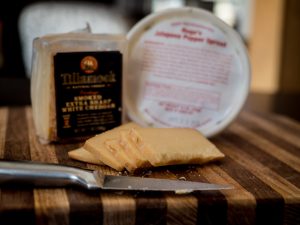 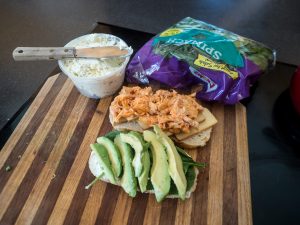 So now we assemble.  I spread the pepper spread on one side of the Sour Dough bread and topped it with spinach and the sliced avocado’s.  On the other slice went the cheese and meat and slapped the two sides together! 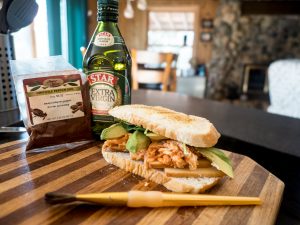 A chipotle, or chilpotle, which comes from the Nahuatl word chilpoctli, is a smoke-dried jalapeño.

I topped the bread slices with olive oil and some ground chipotle pepper.  It is time to move it over to my panini grill and melt all that goodness! 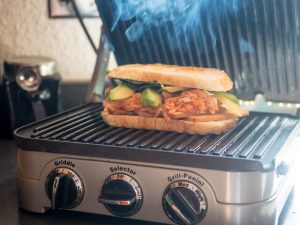 In many English-speaking countries, a panini or panino is a grilled sandwich made from bread other than sliced bread 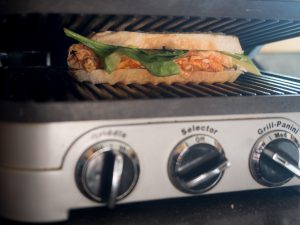 smash that gooeyness together

It took about 5 minutes on medium and than I turned it down to low to get it all nice a melted.  Removed from the grill, let it sit a few seconds before slicing and enjoying! 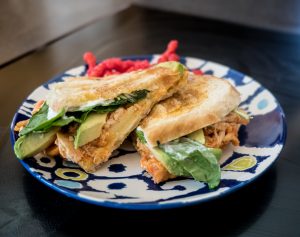 one of the best things since sliced bread

Apparently, I didn’t think I had enough heat going on (and actually it was not an overpowering spicy sandwich…it all just worked really well together) I sided my sandwich with spicy hot cheese crunchers!  I think a good beer would be the icing on the cake, but I stuck with water tonight! 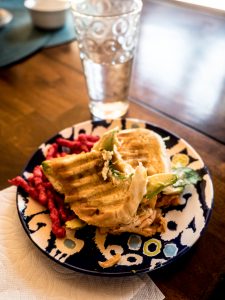 Buffalo chicken gets its origins from Buffalo New York, and Buffalo wings.